Touch wood, we are on schedule for our shoot at Old Tuscon in mid-May. Pre-production begins in late April, but pre-pre-production is already here, and the designs of the art department advance. What follows is a ramble, if you’re interested, about the sources on which the characters and incidents in the screenplay are based.

For TOMBSTONE RASHOMON there’s no shortage of published source material – a lot more than in the case of William Walker. In the 1960s I read, in the school library, Stuart N. Lake’s WYATT EARP, FRONTIER MARSHAL. This was the third of three biographies Wyatt Earp collaborated on, and the first to be completed. It is, of course, a hagiography, but as I recall and entertaining one. It was the basis for Allan Dwan’s FRONTIER MARSHAL, and for John Ford’s MY DARLING CLEMENTINE, which followed Dwan’s film and borrowed substantially from it.

Some years later I read a paperback biography of Doc Holliday, which had an action painting of a fearsome (and impossibly beefy) Doc on the cover – the title eludes me now – and enjoyed Frank Perry’s anti-Earp Western, DOC. Over the last year, in preparation for screenwriting, I’ve acquired some fifteen other volumes dealing with the OK Corral gunfight, and found some good magazine articles online.

Wild West magazine has excellent pieces which fill in background detail and make the story even richer. In addition to political rivalries between the Republican faction (the Earps, Tombstone Mayor Clum, Pima County Sheriff Bob Paul, The Epitaph) and the Democrats (Johnny Behan, the Clantons, the McLowrys, former Pima County Sheriff Charles Shibell, The Nugget), there was also deadly turf war between gambling factions – the Slopers (from California and Nevada) and the Easterners (Kansas gamblers with whom the Earps were allied): see Roger Jay’s article The Gamblers’ War in Tombstone (Wild West, Oct 2004), and Bob Palmquist’s Short vs. Storms (in the same issue). Curly Bill Brocius, whom Wyatt Earp claimed to have killed, is featured in The Winding Trail of Curly Bill (Wild West, Oct 2001). Colonel Hafford, ornithologist and saloon owner, is briefly profiled in The Bird Man of Tombstone, by Jane Eppinga (Wild West, Aug 2012). Twenty-Four Hours with Ike Clanton, by John Rose (Wild West, Oct 2006), A Gunfight Shrouded in Mystery, by Casey Tefertiller and Jeff Morey (Wild West, Oct 2001) and Fatal Mix-Up on Fremont Street by Roger Jay (Oct 2012) are all good resources.

In terms of the books, Walter Noble Burns’ TOMBSTONE: AN ILLIAD OF THE SOUTHWEST is a splendid read (as they say on book jackets). First published in 1927, it is highly pro-Earp, and written in the most flamboyant style. Some of its descriptive passages, such as Curly Bill’s cowboy ambush of Mexican smugglers, are outstanding. One of the first books to take a critical view of the Earps and Holliday was Frank Waters’ EARP BROTHERS OF TOMBSTONE, published in 1960. Waters tells the story from the perspective of the women in the Earp clan: as a small boy he knew Allie, Virgil’s wife. Allie was not partial to Wyatt.

Casey Tefertiller’s Wyatt Earp biography, published in 1997, is a big, serious, well-written book on the side of the Earps. Allen Barra’s INVENTING WYATT EARP (1998) is a lively history of Earp and the development of his legendary character. Andrew Isenberg’s WYATT EARP: A VIGILANTE LIFE (2013) is another good biography; and THE LAST GUNFIGHT, by Jeff Guinn (2011) is a fine account of the event, its proceedings, and its surroundings. All are Earp-friendly.

Anti-Earp books which are worth a read include AND DIE IN THE WEST by Paula Mitchell Marks (1989) and Joyce Aros’ MURDERED ON THE STREETS OF TOMBSTONE, published in Tombstone in 2013 (I purchased my autographed copy at the excellent bookstore there). Bob Alexander’s SACRIFICED SHERIFF (2002), previously mentioned here, is a good biography of Johnny Behan. And Ward Churchill very kindly sent me his copy of THE GUNFIGHER WHO NEVER WAS, by Jack Burrows (1987), which tells all there is know about the Clantons’ crony John Ringo, and more besides.

The best resources, as far as our script has been concerned, are John Richard Stevens’ WYATT EARP SPEAKS! – a collection of interviews by Earp and Holliday, which also contains a letter from Kate Horoney/Elder/Fisher to her niece – and THE OK CORRAL INQUEST edited by Alford E. Turner. These two books give us a taste of the Earps, Holliday, Ike Clanton and Kate speaking their own words, and have been invaluable.

A couple of weeks ago, in Bandon, Oregon, I made an incredible haul of twenty Time-Life “Old West” books. Are you familiar with these? These Time-Life were collectible series for my parents’ generation: rows of large format, hard-backed books about home repair, cooking, World War II, nature, the family car, et al. All share the American-exceptionalist, Manifest-Destiny, casually sexist world-view of Time-Life (to accompany the 27 books about cowboys, gunfighters, townsmen, great chiefs, forty-niners et al, there is a lone volume titled “The Women”) and they are very handsome tomes. My twenty cost me forty bucks. I am so happy to have reconnected with them, and to have them in time for the shoot. Due to the quality and number of their illustrations, the faux-leather-bound Old West series are a serious asset to an art department, a costumer… or a screenwriter! 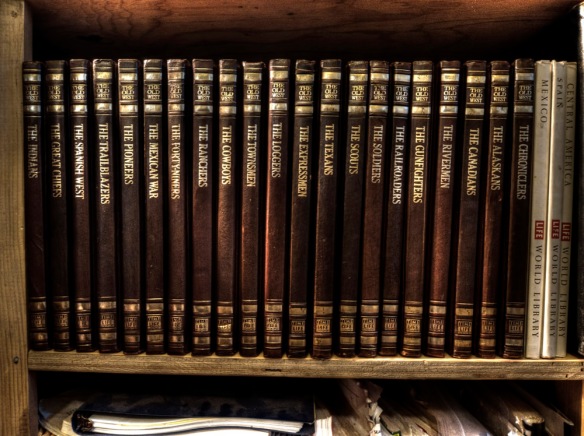