Four days’ drive has brought me and Pearl to Tucson, where we shall shoot TOMBSTONE RASHOMON in three weeks’ time. Before I left Oregon my friend Drew Pratt gave me five pairs of boots which he thinks either are, or resemble, “period.” I shall give them to Sam, our costume designer, when we meet this week. After the shoot we’ll donate them to the Old Tucson wardrobe dept. The lovely boots can be seen here:

I made a slight detour en route to visit Earp, a town in California originally called Drennen. Wyatt Earp and Josephine Marcus lived there in the early 20th Century and Wyatt prospected there for a while. In 1929, after his death, Josephine petitioned to have the town’s name changed to Earp. I’d forgotten that I’d already been to Earp – we shot part of SEARCHERS 2.0 there: the scene where Mel, Delilah and Fred stand overlooking the Colorado River and decide to eschew the freeway entirely, en route to Monument Valley.

But I had not ventured inside the general store (the only building that remains) and so was rewarded with a substantial shrine to Wyatt Earp. There is a life-size dummy of Earp, wearing a long black coat, a mural of the Tombstone gunfight, a replica of his pistol, and, best of all, a Wyatt Earp fortune telling machine. This comes to life if you stand near it, and Wyatt says, “Step up, pardner, and get your fortune told.” 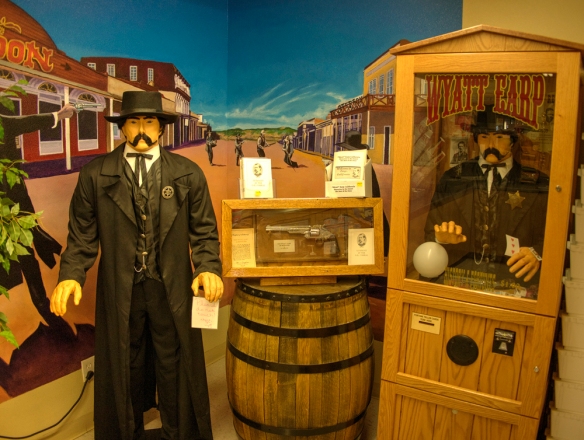 It cost a dollar, and I could not resist, though my fortune was pretty strange:

“You may be riding the winds of change… As the blessings of health and fortune have a beginning, so they must also have an end… He who could foresee affairs but three days in advance would be rich for thousands of years.”

Well, okay. I get the idea of making money by being able to predict the future. But to stay rich for thousands of years might be more of a curse than a blessing. So I guess I’ll eschew that and carry on as before.

Over the next three weeks I’ll meet the local actors, do some rehearsin’, and spend a lot of time with the art department, and our designer, M.

Time will fly. No doubt there will be developments along the way.