On Tuesday I’ll head south for Arizona, where I have a date at The Loft to promote TOMBSTONE RASHOMON and screen REPO MAN on Sept 24. Given the campaign’s (how to put this?) lack of traction, it may seem like a Quixotic quest, but it’s an opportunity for me and Pearl to see (and camp in) a number of beautiful places which are harder to appreciate when you just fly over them (see below). 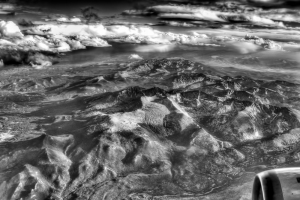 That’s the view of the Continental Divide from the puddle-jumper which connects Medford to Denver, non-stop in a couple of hours. Whereas to drive from Southern Oregon to Southern Arizona is going to take me 12 days. Excellent! My itinerary is something like Pyramid Lake, NV/Austin, NV/Cathedral Gorge, NV/Kodachrome Basin, UT/Waterpocket Fold, UT, then either via Monument Valley or National Bridges NM, and south via Globe to Tucson. Globe was for a while the home of Kate Fisher/Elder, the companion of Doc Holliday. She owned a hotel there, till it burned down (as towns did frequently in those days before the Fire Department), and I’m hoping there’s some pamphlet or locally published book I can pick up there about her adventures, and possible eye-witness account of the Gunfight near the OK Corral.

I’ll post an account of my trip in the Updates section of our Indiegogo campaign page. That way, if you would like to read them, you may be tempted to throw a mite our two into the campaign, which runs until Sept 27.

Since I’m a loyal member of the Green Party in the UK, it doesn’t necessarily mean much that the disgraced Labour Party over there has a new leader… Unless… could Jeremy Corbyn be telling the truth this time, when he says that if Labour is elected he will renationalise the railways and defend the NHS? The “New” Labour of Tony Blair and Gordon Brown promised this, too, lied about it, and led us into a series of wars (against Serbia, against Afghanistan, against Iraq) which gave Europe its current refugee crisis. Drop bombs on people’s homes, drive them out in the name of “regime change” and “colour revolutions” and where are they supposed to live? Right next door to you (unless you’re David Cameron or Tony Bliar).

Should we believe Corbyn when he says he wants things to be different? I know of no rational reason to believe anything any mainstream politician says. But then there is the matter of Corbyn’s face. Consider the general run of politicos – the Bliars, the Camerons, the Milibands, the Bushes and most of the clown-car aspirants for the Republican nomination – and what is remarkable is the sheer blandness of their faces. They have round, smooth, shiny egg-like aspects which seem unaffected by the wickedness of their deeds. Whereas Corbyn’s face is wracked. He looks like a painting by El Greco – lines of pain and sadness etched visibly, as if he had watched the unfolding of war and economic devastation and been moved by it – moved to feelings of grief, of guilt, and of regret. Some politicians faces’ do reveal them – Trump is clearly an angry, bilious guy, Hilary Clinton a corrupt and dangerous individual. Most are simply bland. But Corbyn’s face communicates such pain that I am inclined to believe that the events of the last twenty or thirty years have had some actual effect on him.

Who knows? The English media and his own political establishment will work ceaselessly to destroy Corbyn and get him replaced with another egg-face prior to the next election. But to see a visage marked by such sadness gives me some hope, for there is hope in sadness and regret, while triumphalism and denial lead elsewhere.

We threw the official TOMBSTONE RASHOMON launch party in Boulder, CO, on Monday. “Back our film and we’ll buy you a beer and a slice” was the theme of the event. And many of those who came had indeed backed our Indigogo project to raise money for the film — or assured us they were about to!

Those present were obliged to watch the video which accompanies the Indiegogo page, as the accompanying photo, by Pablo Kjolseth, indicates. 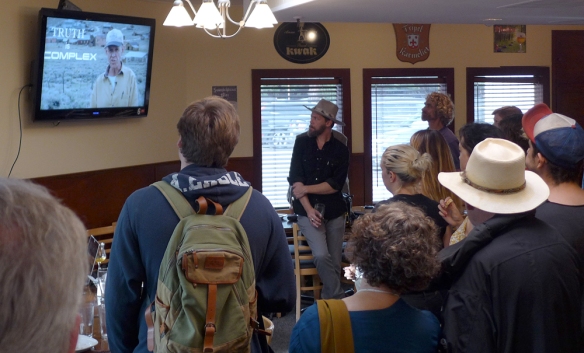 Truth is complex, as all present agreed!

So far the project has had splendid shout-outs from Neil Gaiman, Frank Cottrell-Boyce, and Lloyd Kaufman, among other discerning lovers of drama. Wyndham Hannaway has offered to loan us “his best camera” when it’s time to shoot (and if you know Wyndham his best camera is a wonderful thing).

I’ve posted a new video about the TOMBSTONE RASHOMON location, and the possibilities of shooting the walk to the gunfight in plano secuencia: one single moving master.