VANISHING POINT is a road movie made in 1971. I saw it years ago, and had a brief and enlightening email exchange with the original author of the tale, Malcolm Hart. On my shelf of DVDs sat the Japanese “King Records” double disk version, assembled by the great Japanese cineaste Katsumi Ishikuma… So I took it down, peeled off the shrinkwrap and opened it up.

There are two versions – the American release version, and the UK version, which is a little longer and contains a splendid scene in which the taciturn protagonist, Kowalski, picks up a hitchhiker, played by Charlotte Rampling. Like the beautiful lady who tells Toby Dammitt “I’ve been waiting for you for a long time” it is pretty clear that she is Death. It seems like the American producers really didn’t get the film. For Richard Zanuck, the child studio head, it was a low-budget way of showcasing a muscle car and paying off some debts to his pals. But Zanuck’s parents fired him during the production – according to the director, Richard Sarafian, whose commentary is spendidly disgruntled and old-school – and took over the studio to make it safe for HELLO DOLLY and their real films.

Which was unfortunate, since VANISHING POINT is a very good picture, which – if Sarafian is correct – was the first road movie to feature the extreme telephoto shot of cars approaching out of the heat haze, a shot now de rigeur in all road movies made since, including DUEL, ELECTRA GLIDE IN BLUE, and my own EL PATRULLERO.

The authorship issue… Malcolm Hart, who wrote the original screenplay, is credited with quite a demeaning title card: “Original Story Idea by…” Instead, the screenwriter is identified as one Guillermo Kane. In his commentary, the director recalls Kane as creating the Super Soul character (who was supposed to be a Latino disk jockey named Super Spic – an idea which didn’t go far). One of his pursuing policemen makes a joke about Kowalski taking the car to Cuba, which perhaps might be attributed to Kane – who was in fact the Cuban author Guillermo Cabrera Infante.

VANISHING POINT was green-lit by 20th Century Fox in order to do “some people” favours. One of the recipients was Barry Newman, who wasn’t the director’s choice: Sarafian wanted Gene Hackman. Newman is fine in the role, but he wasn’t a big star and Sarafian is adamant that his casting was done to please some associates of Fox… The car itself – a Dodge Challanger – was imposed on the picture. Chrysler/Dodge had been in the habit of loaning cars to the studio for a dollar a day. The director didn’t get to choose the Challenger: it was a done deal.

I think the presence of Cabrera Infante falls into the same category. The author, recently defected from Cuba, had been the Revolution’s Minister of Culture. He was a big catch for the Americans. Political defections may occur for various reasons, and one is the desire for a better material existence in the United States. When a high-ranking politician jumps ship there’s plenty of negotiation as to the pay-off they’ll receive. English wasn’t his first language, and he has almost no other script credits. But so what? A writing credit on a Hollywood movie would be a good way for him to receive one of his CIA pay-offs…

Go on, tell me it isn’t so! CIA and the Pentagon would never involve themselves in Hollywood movies, would they?

But my main thought about VANISHING POINT is how great it might have been. It’s a good film, of course, particularly in its beginning and at the end. Barry Newman and the Challenger carry the film. It is buoyed up by some fantastic stunt work and the splendid photography of John Alonso. And it is weighed down by a series of encounters with eccentric, unbelievable characters.

The vice of VANISHING POINT is its failure to follow through on its premise: that Kowalski is all alone. Kowalski, as we are shown him, has no friends he can rely on (other than to score him drugs). He is literally only about speed – in the sense of the amphetamines which keep him awake and kill his judgement, and in the unbeatable velocity of his white muscle car. This makes him a very, very interesting character. The flashbacks which fill in his back story (girlfriend dead in surfing accident! the only honest cop on the Venice police force!) are unconvincing and unnecessary. So are almost all his interactions on the road – with gay stickup artists, with an old prospector, with a revivalist minister, with a naked woman and her goofy boyfriend – who cares about these?

If you’ve seen the film, imagine it without them – yes, even without the nude biker girl. Imagine Kowalski all alone, with just his car and the voice of Super Soul on the radio. Imagine all those interactions and sideshows gone — just Kowalski, pursued from state line to state line by different armies of cops, escaping all of them — headed for his meeting with Charlotte Rampling, the hitchhiking Angel of Death.

What a film that would have been!

How many talking pictures had an entirely mute protagonist? I can only think of a couple – IL GRANDE SILENZIO (what if Corbucci had directed this film?) and COCKFIGHTER (where TWO-LANE BLACKTOP director Monte Hellman directed Warren Oates in an almost-entirely silent role). Both pictures are excellent – as is the first act of PARIS TEXAS, which Harry Dean Stanton plays in a similar vein.

Malcolm Hart told me that Kowalski didn’t die in his first script. Facing a road block of police cars and bulldozers, Kowalski put pedal to the metal… and drove right through ’em. The last shot was of Kowalski at the wheel, smiling to himself as the muscle car flies on through the stratosphere.

(Years later, that would be the ending of REPO MAN, of course… But did Otto and Bud follow Kowalski to the Other Side? Or will they return? We’ll have to wait for REPO MAN 2, in 2019, to figure that one out…)

Fascinating in addition to the film itself was the map included with the Japanese DVDs — for it is the map of my commute from Oregon to Colorado – via Highway 50 (“Loneliest Road in America”) and the Interstate through Green River and Glenwood Springs. In 1971 there was no Interstate though Glenwood Canyon, just a two-lane highway, and it’s tremendous to see how that iconic canyon looked before all that concrete got cantilevered in there. Whereas Austin, Nevada, home of the Serbian International Hotel, looks exactly the same.

I’ll be taking that commute one more time, soon, even though I’m no longer teaching at CU Boulder — for the launch party of my next film, TOMBSTONE RASHOMON.

What (I hope you ask) is TOMBSTONE RASHOMON? All will be revealed on 27 August, when the new crowdfunding campaign goes live. Unlike BILL this will be a commercial feature, and we plan to pay the cast and crew (imagine that!). And it will be quite unlike any other film about certain events in Tombstone, AZ, as you’ll see…

For now, if you’re around at the end of August, I’d like to invite you to join me and my esteemed producer, Merritt Crocker, in Boulder for a beer to celebrate the launch of the campaign. Venue and date of this exciting event to follow…

And if you ever felt an urge to tear the t-shirt of the director’s back, rewards this time will include my personal collection of production t-shirts from REPO MAN on… 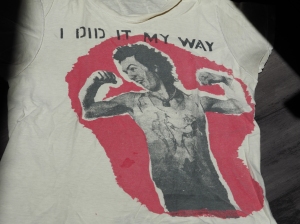