Since Gerry Donaghy was nice enough to send me not one but two books (I just received a copy of The Collaboration from him) I’ll spend Labor Day following through on my promise to compare The Jupiter Plague with Harry Harrison’s earlier version of the same story, Plague From Space.

Both are substantially similar: the earlier one is shorter (the Bantam copy Gerry sent me has 154 pages of story; while the Tor edition of the second book runs to 280 pages — though this is mainly caused by a bigger typeface and fewer words per page), and better. So, for Harrison enthusiasts, two questions arise: why did Harry rewrite his original novel, and what changes did he make? Let me attempt to answer these.

The Plague books are part of a sub-set of science fiction which I would guess is called Medical SF (just as The Forever War and Ender’s Game and Bill The Galactic Hero are apparently termed Military SF). The earliest examples of this that I can think of are C.M. Kornbluth’s Little Black Bag and Rick Raphael’s Code Three. Harry was a prolific writer and dealt with many SF sub-genres; space travel, time travel, alternate histories and universes, and in this case a First Contact story which is also a medical drama. Here the Jupiter probe returns to Earth with a devastating disease on board – prescient as always, Harry chose the plague to be a super-deadly form of avian flu!

Harry wrote quickly, and liked to consult experts on the subject matter of his books. Whatever it was – disease, or overpopulation, or dinosaurs – he would acquire pretty deep info from scientists and include a lot of it in the resulting book. Whether this is a good thing I am not sure: “hard” science fiction often gets bogged down with technical information of interest only to specialists in the field, and Bill is great precisely because Harry didn’t need to consult any experts — he had all the info he needed, first hand. Also, Bill took him several years to complete, whereas most of his books were written in a matter of months. The Galactic swear-word “bowb” appears once in both versions of Plague.

But, why did Harry write the same book twice? Therein lies the tale. In 1969, the up-and-coming author Michael Crichton published his first SF novel, The Andromeda Strain. This is the story of a probe which, having visited Mars, returns to earth bringing with it a deadly virus against which scientists and the military must join forces to fight. If this sounds almost exactly like the set-up of Plague From Space, well, it is. Harry certainly felt it was, and when Crichton’s book made the New York Times bestseller list and was turned into a big-budget, not-very-good Hollywood science fiction movie, Harry also felt that he lost out on a substantial revenue stream. So, realizing that times had changed and that “popular” books were bought on the basis of bulk rather than brevity, he decided to expand Plague From Space.

Harry was always technologically ahead of most people’s game, and I’m sure that when he embarked on the rewrite in 1981, he had both a computer and some form of writing/editing software. Did the original draft exist in some electronic form? Almost certainly not: computers in the 1960s were like HAL in 2001: half a city block long and buried in the basements of high-tech enterprises. So someone transcribed the original book to disk, and Harry, working in DOS or some even more arcane OS, set to work expanding it.

The book begins with the hero, Dr. Sam Bertoli, playing chess against a computer. in the revised version the computer speaks; the Bobby Fischer move Bertoli makes is updated, from 1973 to 1987 – and Fischer’s opponent’s name is changed from Botvinnik to Smyslov. I don’t see the need for any of these changes (except the date, to keep it in the future) but assume they meant something to Harry! The scene where the doctors arrive at JFK airport – where the returning Pericles has crash-landed, is expanded, yet – as in the original book – quite devoid of excitement. This is strange and I can’t understand why Harry – a writer of fluid and exciting action – didn’t beef up the airport disaster. In chapter 3 Harry adds a bit of back story, explaining that our hero became a medic thanks to the example of a Tamil army doctor (the military in this book is the UN Army, which may partially explain why the Esperanto-speaking author is so admiring of its officers and actions, as opposed to his view of the Troopers in Bill.) In chapter 5, the ambulance driver, Killer, goes into detail about a Safeway sacking on the East Side: Harry is never one to romanticize The Mob.

Near the end of chapter 6, Harry adds some dialogue for Dr. Nita, Dr. Bertoli’s squeeze, in which she speculates humankind may go extinct like the dinosaurs. In chapter 8, a “nightmare scene” occurs beneath the Koch Bridge on 23rd Street (previously the Wagner Bridge). And a few words are added to the start of chapter 10, where Nita and Bertoli discover she has contracted the plague. When Bertoli ducks into a bar to get a drink, in the rewrite we’re told he hands over “a five dollar bill.” In the original it as just “a bill”. Presumably this is to allow for inflation. Then, in the rewrite, Harry has Bertoli enter another bar, where he is menaced by junkies eager for the contents of his doctor’s bag. A scene of violent drug addicts being overcome in physical combat by an upright hero was probably de rigeur in New York tales, post Death Wish, and I imagine Harry was thinking of the movie rights when he wrote it.

A scene where Bertoli and a young UN Lieutenant share a pack of cigarettes is gone in the re-write. The flashback, where we learn what took place on the doomed Jupiter mission, is expanded into its own chapter, with scenes aboard the orbiting spacecraft.

The scenes aboard the Pericles on Earth are unchanged. This is a good thing, since their description of the hidden technological changes aboard the craft, and the revelation of what resides within, are splendid. The reader may not be surprised when the Plague books turn out to be a First Contact story; that aspect of the tale is handled very well indeed.

There’s a small addition as Bertoli returns to Bellvue Hospital, in which he beats his fist against the armrest and worries about his beloved (the love story is the least-good part of the tale, the infected heroine being out of action on a hospital bed for more than half of it). And there are interesting changes at the very end — one apparently in error (it seems that the software has got some dialogue in the wrong order, so that Killer is still conversing with Bertoli after he has bowed out) and one in anticipation of a return mission to Jupiter – to be undertaken by robot landers.

Were the changes worth it? Presumably, since the  book sold copies and added to a working writer’s revenue. On the other hand, none of the changes makes any real difference. As a big fan and a friend of Harry, I of course wish that he had concentrated more on writing original material rather than revisiting earlier books for sequels and re-works. But he knew what he was doing, and we are all guilty of this.

A couple of notes about the two volumes: Plague From Space, like all Bantam paperbacks from the 1960s, has a great cover which depicts exactly what the book is about — a plague-sore-raddled, dying spaceman against a field of red. No illustrator is credited, but I’d guess it was Jim Bama, who did the great covers for their Doc Savage series. This volume is also dedicated, to Hubert Prichard, “in memory of the many fine days since 117.” The Tor edition of The Jupiter Plague, on the other hand, has an indifferent cover, featuring a rocket-launching pad, and a huge red Jupiter in the sky, with a skull superimposed on it. The back cover gives the game away — it’s a continuation of the front, and the barcode is superimposed over a reclining figure, whose left leg emerges from it. in other words, it’s probably the cover of another book, recycled for this one! The Tor edition omits the dedication to Hubert Prichard; but above the title the cover reads “Jim Baen Presents: Harry Harrison.” I don’t know who Hubert was, but Baen was a SF publisher who apparently took the Lawrence Lessig approach to electronic publishing, when that came along – refusing to saddle books with DRM, and giving away .rtfs to promote hard copy sales. 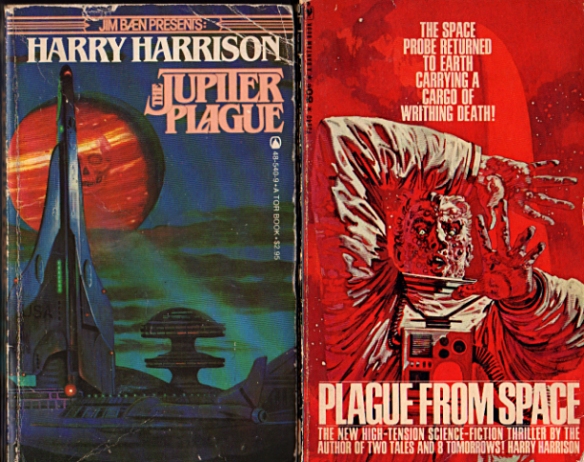 A year ago two of my production students made a presentation about crowdsourcing: the differences between Kickstarter and IndieGoGo, and the importance of social media to drive interested parties to your fundraising activity. The guys asked how many of their fellow students were on the Twitter: about half were. They asked the ones who weren’t Twittering to join up, and then to Tweet and reTweet their call for money. Apparently the Facebook can be employed in a somewhat similar way.

It was a very clear presentation, though I haven’t employed its lessons till now. I still write with a quill pen, and send letters via pneumatic tube, so am not at all clear on any of the above concepts. The Facebook, as far as I know, is a place to post embarrassing pictures of oneself (I already have a website for that). And the Twitter has something to do with the Occupy movement. Nevertheless, BILL, THE GALACTIC HERO clearly requires a social media presence – y pronto!

To my surprise I discover several BILL, THE GALACTIC HERO pages already in existence on the Facebook. So my next assignment must be to introduce my project to them, and to their well-heeled, film-financing followers…Not that I wish to give the impression that my new interest in social media is all about money. Far from it. I’ve been thinking I don’t spend enough time with my computer lately, and this will be an opportunity for us to bond.

And besides – there’s a reason to make BILL THE GALACTIC HERO into a film: because it is that rare thing, a genuinely anti-war story. Histories of science fiction tend to race from STARSHIP TROOPERS to ENDER’S GAME and overlook the anti-war novels which appeared in between. THE FOREVER WAR gets a mention, but BILL THE GALACTIC HERO is notable by its absence — perhaps because it is the most critical of military culture, or technology-worship, and of the military-industrial-capitalist end game. TROOPERS and ENDER’S are both very right-wing texts by right-wing writers. BILL isn’t just a left-wing text — it’s funny, too!

(In the interests of full disclosure let me point you to this video of a scene from BILL shot by students of UMKC. Our version will look a little different – to be shot in 35mm black and white with all the characters in full space suits – but this is a worthy Missourian effort, lacking only the Zoroastrian angle…)