This is a brief dispatch from Tabernas, Spain, where the ninth annual Western Film Festival is in progress. Four days of Western features, Westerns shorts, and Western-related events in and around the desert town where I used to live, and where so many great films were made.

And are there still Westerns? Yes indeed. The festival, directed by Eduardo Trias, who was once the director of the Huelva Film Festival, features films from the US, Argentina, France, Brazil, Spain, and Colombia. There are also a pair of documentaries – an Italian one about George Hilton, and a French one about Sergio Leone. I am a guest, screening STRAIGHT TO HELL (which was shot in this same desert, many years ago), and also honoured to be the recipient of the Premio Tabernas de Cine, which includes a handsome trophy, a stay in a delightful cabin in the Fort Bravo Western town, and – splendid to report – a chair with my name on it, on the road into town.

A chair may seem like a strange award, but in fact it is delightful – made of metal, bolted to the ground, it will last a lot longer than I will. And, most wonderful of all, my chair is next to the one awarded to last year’s guest, Claudia Cardinale. So on your next visit to Tabernas you can take your ease with me and Claudia. They are very comfortable! 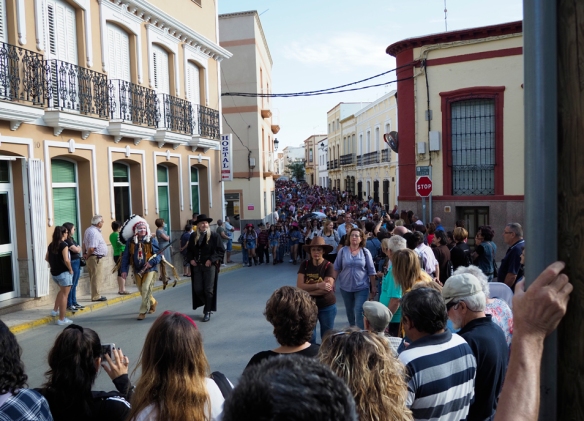 The presentation of the chairs was proceeded by a march through town: locals and festival attendees dressed in the appropriate attire, covered wagons and stagecoaches, and four hundred children. If you have never seen four hundred children, dressed as cowboys and Indians, line dancing on the main street of a Spanish town, come to Tabernas for the Festival next year. It is a fantastic sight.

In addition to the two shown in the illustration, there are chairs for Terence Hill, George Martin, Enzo Castellari, Sara Montiel, and others who made films here. There is also live music (from Sarah Vista and the Chisum Cattle Co.), and a selection of Western-themed tapas in the local bars. And this morning, when I got up, they were shooting a new Western on the main street of Fort Bravo. I’ve no idea what it is, and the last thing film crews want is to be bothered by someone asking, “Hey, what’s the movie?” But if makes me very happy that Tabernas remains a desired location and that the finest form of cinema is still alive.

Especial thanks to Jose, the mayor of Tabernas, to Rafa, the director of Fort Bravo, and to the marvellous Cristina Serena, whose warmth and personal attention make the whole thing run so beautifully.