So, in honour of my dear friend Harry Harrison I embark upon this new site, and a new project: the feature film version of BILL, THE GALACTIC HERO – Harry’s immortal science fiction novel, which I first optioned and tried to make into a film way back in 1983! This was right as I was finishing REPO MAN: I met Harry at his hotel in Hollywood – the one where everybody used to stay, with the famous diner attached, long bulldozed now – and he plied me with gin and limes, and I optioned the rights to the book for six months. My attempts to make BILL my second feature didn’t succeed: “Too expensive! Too anti-war!” So I ended up making a picture called SID & NANCY, instead.

But BILL, the great, transgressive riposte to STARSHIP TROOPERS, remained unmade. Heinlein’s right-wing tract got made into a picture, and many, many, many bad science fiction films were shot. Harry’s MAKE ROOM, MAKE ROOM! had been filmed back in the 70s, as SOYLENT GREEN. He was a popular writer in Russia, and over the years I helped him try to get DEATHWORLD made there, as a superproduction funded by Gazprom, and also WEST OF EDEN, his dinosaurian alternative history, as a cartoon film. Splendid projects which did not materialize.

And then, as luck would have it, I found myself teaching film and making movies at one of the world’s premier universities, and the thought occurred to me, now, at last, I can make BILL, THE GALACTIC HERO the way it should be made: not as a hundred million dollar studio picture, but as a hundred thousand dollar student picture, shot and acted by my esteemed students, working for free! I tried the idea out on Harry, who was all in favour. He persuaded his agent, Nat, to grant me an academic license to direct BILL … a non-exclusive license, so if you’re reading this, George Lucas, you can still direct your own hundred million dollar version, simultaneously.

Meanwhile, I embark on the thrilling prospect of a Kickstarter campaign… 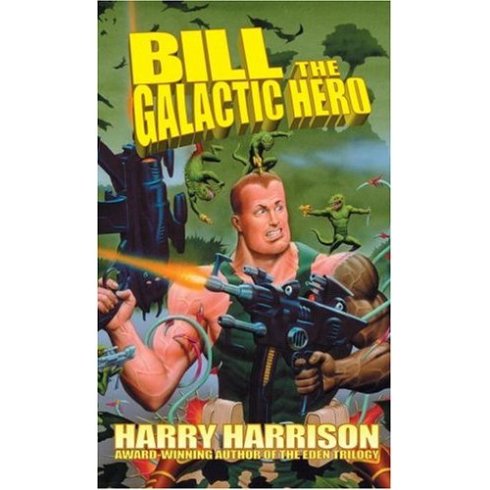 2 thoughts on “BILL, THE GALACTIC HERO”